skip to main | skip to sidebar

Sometimes you need to drown your sorrows in non-stop sound

Friday night was a marathon show hop for me. Somehow the stars aligned in such a way that I was able to see a whopping 5 bands play back to back at separate venues. It was like driving down a long road and hitting every green light as you go. Suweet. 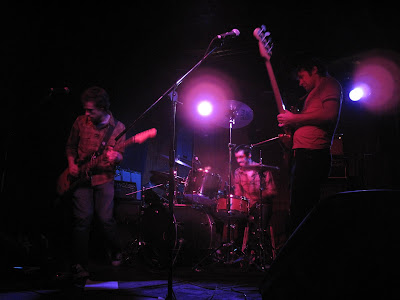 First up was Kung Fu Grip at the Annex. I met these guys a few years back when they were called Good Grief. My band Object played a bunch of packed all ages shows with them in Bayridge. At a certain point they morphed into Kung Fu Grip, with drummer Anthony Kapfer switching to guitar and vocals. After a revolving cast of drummers failed to work out, Anthony has now gone back to playing the kit. Accompanied by Ricky's tasty riffage and Matt Rocker's solid bass lines and harmonies, Anthony is one hell of a hard hitting/singing frontman! It was also great to hear them break out the occasional Good Grief tune with Ricky signing. KFG just finished up their second album and it kicks butt! 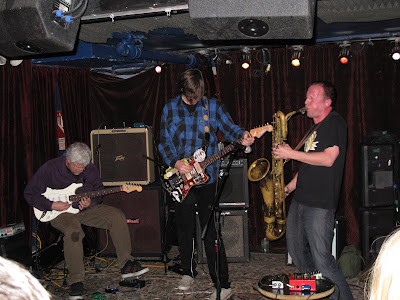 Up next was Thurston Moore doing an improvised noise set at Rehab with his brother Gene Moore on guitar and Mats Gustafsson on saxophone and weird little electronic oscillator synths. I have to say I was a bit disappointed with this set, which was plagued by bad sound (it was hard to hear Thurston jeez!) and somewhat uninspired playing. Although he pulled out similar tricks, like playing the guitar with a metal file (the high point of the set by the way), this set wasn't half as exciting as the last time I saw Thurston improvise with the amazing harpist Zeena Parkins. That was a lot more energetic and awesome! I hate to be a downer but when Thurston Moore is less engaging than your friends' bands something is not right. Sorry Thurston, I still love ya! 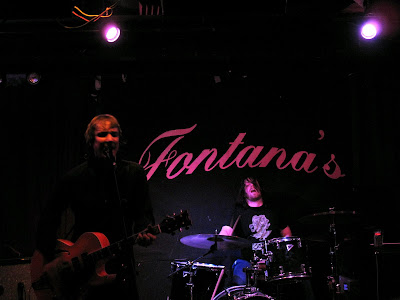 Got down to Fontana's just in time to catch Guitar Bomb covering Manic Depression (you bastards I was gonna cover that!). A cover can go either way, sometimes ruining the song forever for me, but luckily these guys have the chops to take on a Hendrix tune and nail it. That kind of sums it up about this duo; they've got the skills AND the raw power that make them undeniable. Guitar Bomb's punk infused blues/rockabilly is the real deal kiddies! The energy level was high as they ended their set with the entire floor dancing their asses off. 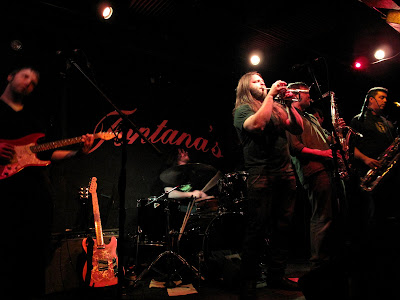 Claws of Paradise really brought it home, as they say. Guitarist Ryan Havers fed his amp some beer before the set then proceeded to go crazy with the cheese whiz. The result was delicious. How else to describe the music of Claws besides a smorgasbord of elegant and arousing delicacies from all over the musical world? They start with a bed of hard rock and blues, throw on some Van Halenesque guitar theatrics, and top it all off with harmonized vocals and horns! And I love how these guys mix high brow riffing with low brow humor! They answered cries for an encore with a floor stomping a cappella singalong called "Everyone's Got a Boner in their Fucking Pants, Everyone's Got a Boner, Take a Fucking Chance." (Thanks dudes that is stuck in my head now). Seriously though folks you won't find a more talented group of guys in New York or really anywhere... 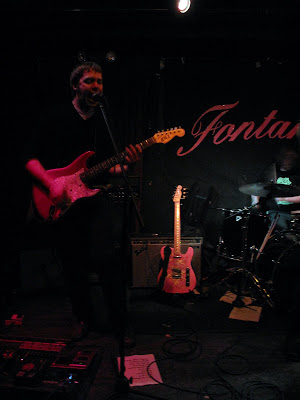 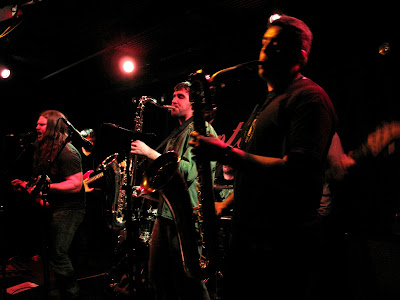 Just when you thought the night (and this blog post) should be over, I was on to the next (and last) thing. I'll keep it short and sweet here, but suffice to say I Love You Airlines at Union Pool was like a sweaty, smoky, sweet mating ritual. I didn't think it was possible but they took the whole night to another level. Whenever I watch ILYA play I am able for a short while to experience a true sense of joy and abandon. It's like happy pills for me. And I'm probably not alone here. I don't know go try it yourself and get back to me. 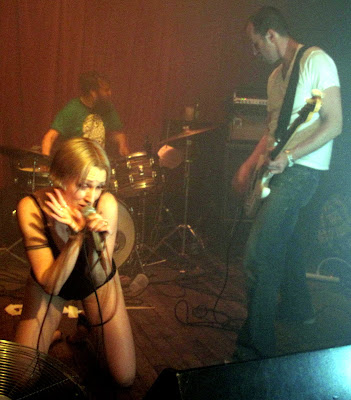 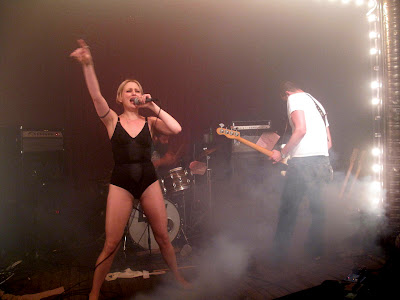 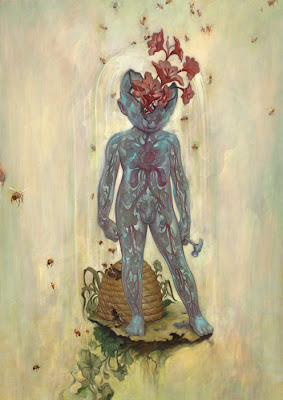 Earlier this month, I attended the opening of James Jean's exhibition 'Kindling' at the Jonathan Levine Gallery. This guy's art is really impressive, especially in person. A picture is worth a thousand words, as they say, so I recommend going down and checking it out for yourself before it's gone Feb.7th!
at 2:01 PM 1 comment: 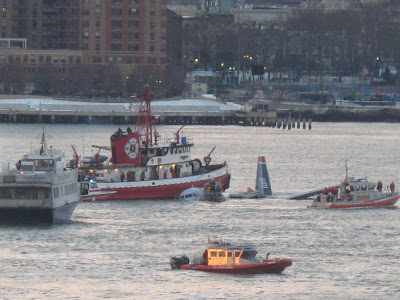 As you probably heard, US Airways Flight 1549 had to make an emergency crash landing on the icy waters of the Hudson River on January 15th. I was coincidentally working near the Hudson and was able to snap a few pics as the plane floated past while being tugged to keep it above water and surrounded by a fleet of ships. Amazingly, all 155 passengers made it out alive and the pilot Chesley B. "Sully" Sullenberger is being honored as a hero. Reports said that engine failure was caused by a flock of birds, but Sully is keeping quiet, causing conspiracy theorists to speculate. Crazy huh? Would you believe there are organizations like the Bird Strike Committee that work to prevent birds from taking out airliners? I did not know that.
at 1:24 PM No comments:

Finding myself at Glasslands twice in two days was definitely unexpected. In fact I hadn't been there in such a long time the decor seems to have changed (no more paint-it-yourself room when did that happen?). Ah well Hipsterburg must grow up too, what with the impending flood of yuppie condo dwellers that is poised to populate the Brooklyn side of the East River.

But I digress... We were at Glasslands to see our friends Forest Fire, who were back from Seattle for a short visit. They were joined onstage by Josh Lozano from Inswarm on bass, harmonica, and sometimes drums, and Sharon Von Etten on vocals. Natalie Stormann traded off on drums and keyboards and Adam Spittier laid down some organic samples. It was an intimate, folksy, yet powerful set, so powerful in fact that they blew a fuse towards the end. Electricity came back on just in time for them to play a few more slow thoughtful numbers. That's really how Forest Fire hits you, like a nice hot apple cider with rum; Mark Thresher's sweet, simple guitar licks and vocals draw you in, you are enveloped by the atmospheric call and response of his cohorts, then you get struck by his next line, which could be humorous, biting, or sincere, but always makes you feel warm and fuzzy inside. 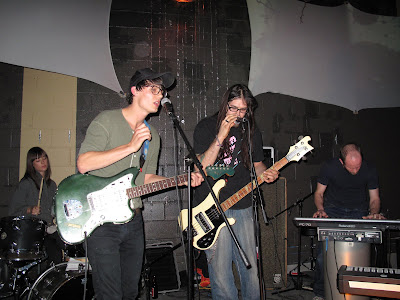 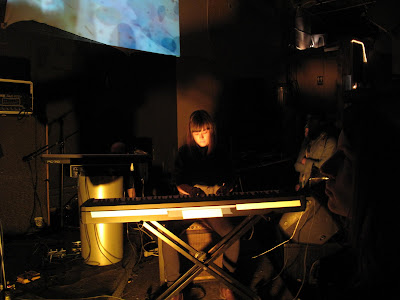 Right before them , I was treated to the blues stylings of She Keeps Bees. I had heard of this duo before and I must say this was a rare instance of a band really living up to their hype! Jessica Larrabee has one of those voices that just screams instant classic through every song, and the bombastic guitar and drums is a solid one-two punch to the gut. 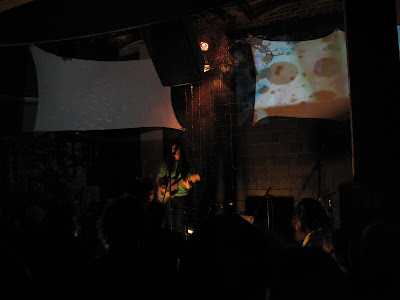 I was lucky enough to have received tickets to see Pat Metheny at the Calhoun School as a xmas gift. I'd never heard Metheny's music, so, not being much of a jazzbo, I had no idea what to expect. Thankfully, I was pleasantly surprised with the performance. Pat started out with some acoustic stuff, heavy on the reverb, and about 3 songs in he broke out this little beauty: 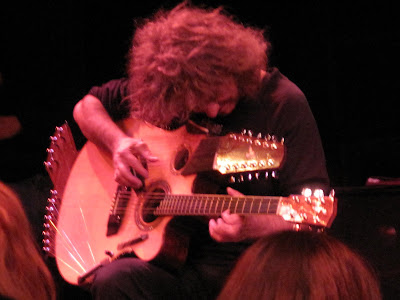 What IS a fake hooker? 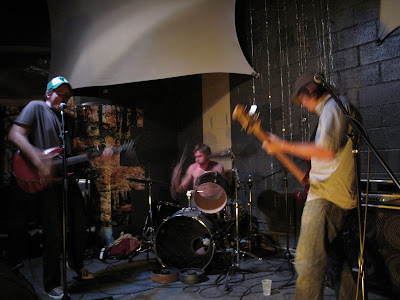 Fake Hooker is my favorite Brooklyn band. They are fast and furious and that's just the way I like it. Combining elements of hardcore, punk, grunge, and screamo, with a modern twist, Fake Hooker firmly stand in contrast to the current wave of hipster pussrock that dominates the scene in Brooklyn. Sadly, singer/guitarist Nate Hall was out sick for their last show that I caught at Glasslands, but the rest of the band thrashed through 10 songs in about 30 minutes. Bravo comrades!
at 4:04 PM No comments:

The Voice of Unreason 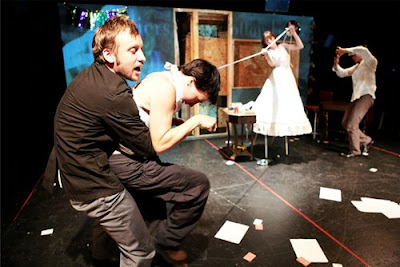 Just did something totally out of the ordinary and saw a play! This was no ordinary play though. Architecting by the TEAM is a surrealistic cometragedramady that makes David Lynch seem tame. This unique narrative covers New Orleans in the wake of Hurricane Katrina, told through the madness of a grieving-28 year old-former child genius-daughter of a dead architect and filtered through Margaret Mitchell's 'Gone With The Wind.' Confused yet? Don't try to understand, just let it happen. While the storytelling is anything but traditional, the acting is classically superb and the sound/video design is truly engaging and enhancing to the overall work. Architecting was recently presented at the Under the Radar Festival earlier this month and has been extended now through Feb 15th after rave reviews. Catch it at PS122.
at 11:28 PM No comments:

Fuckthatnoise
Looking for gold in a sea of shit